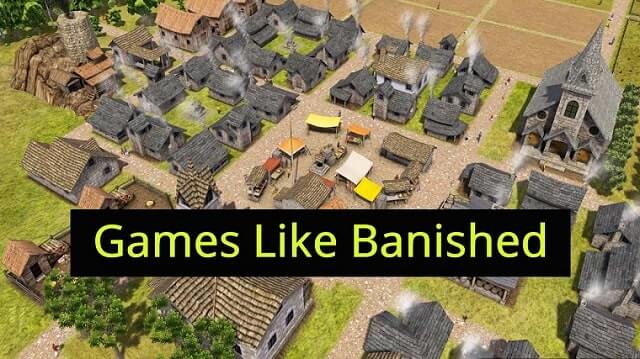 There are a lot of people who say finding similar games like banished is nearly impossible. And I am not gonna argue with that as its a very unique game. But there are also many similar type games out there who have their own uniqueness.

If you are a gamer like me then buying games can be very hard as most games are very expensive. So make sure to check out the best sites like G2A for the best discounts and price on games.

This list consists of the games that I have played and liked, moreover, I have also asked Reddit about some people’s advice about which game they think is similar. In the end, these all games are very good to play and I am fully sure every game you gonna love to play.

Here are The Best City Building Games Like Banished To Play In 2020.

This game has many things that make a good city building game but not only that it has more things to do in it that makes it one of the best city-building games right now. It offers so many micromanagement that put you always in charge of doing something all the time.

When your city gonna be complete, you will have a city which has people who work and behaves in the city just like the real world. If you haven’t played this game yet I strongly recommend it to you. You gonna be blown away with its great management as well as the fun of playing a great city building game.

Anno 1800 is the latest addition to Anno series similar to a Banished game. Anno games series is famous for its great City Building games over the years. This time Anno 1800 brings so much to the table that it’s hard to not play this game at least once. Anno 1800 is based on the revolution of the technology era at the start of the 19th century. The game put you to take strict actions against the old era as you have to make sure your people learn and move with this new technology revolutions. Overall I have to say it is a great game. If you like banished game then you will surely be going to like it too. Make sure to give it a try.

FrostPunk is simply one of the best city-building games out there. Similar to Banished it has its own interest in playing and a loyal players fan club that you soon going to join. The game lets you build the last city on the earth after a post-apocalyptic.

It sounds fun right but remembers it’s not an easy game at all. Right of the bat, the game provides with a harsh environment and a neverending winter. Moreover, you need to make sure everyone survives in the game too as this game is a mixer of both city building and the survival genre.

You need to make a viral temperature for your city to function and survive. This game test your survival and management skills to its maximum. You need to manage and rule over your city people by using the laws that you have specified. A cool game to play in my opinion and I highly recommend it to you guys.

Tropico 6 is the latest addition to the already popular Tropico game series. It is a very well established game series that a lot of users love to play. This game is a unique game on its own. It has all the things a management game needs with a lot of additional stuff that you won’t mind playing.

The game offers you to control multiple Islands as well as introduces a new Political system which I like the most. You surely gonna enjoy this game as it offers many new features to the game. You can be assured of the fact that the more time you spent the more you gonna love it.

It is one of those city building game which becomes iconic like the Banished game. Overall there are many aspects in the game that feels similar to banished. Not only that you also going to find many new things which operate basically differently but are somehow can be related to banished activities.

Ever wish to make a city on an Alien Planet? Well, the Aven Colony game is all about making new cities in different alien planets. Not only that the difficulty of the game is also quite different from Banished or any other city building games.

But the core of a great city building game is still there. In the game, you gonna face many problems and have to come up with some really creative ways to solve them. In normal city Building games, air might not be that important but in this game, if your air is toxic that’s a dead-end for you.

There are many quests in the game that you gonna explore something new most of the time. Make sure to give it a try if you always have a Sci-FI guy. This is a really awesome game and is really different and unique than most other city building games. So give it a try.

Surviving Mars is a great game and as its name suggests, you have to make cities on Mars to survive. But as we all know the conditions on MARS is totally different than here on Earth. There is a lot of difficult tasks for you to do so No Pressure.

You have to start from the bottom so first, you need to make this Planet or at least your city to be habitable. But luckily this game has tools to make it for you. You need to make habitats for the people to live in. All the people’s lives and comfort are on you so you have to make their survival at any cost.

But believe me, it’s not as easy as it seems. The constant change in temperature and in the season will make it harder for you. The lack of oxygen is gonna be another concern for you. Overall the game has many things to do that don’t let you bored at any time. So I highly recommend this game if you want to have a city building experience on MARS.

Township is a very popular city building game for Android Users. It is also available for iOS users so don’t give me your hate ok. This is a really nice game for your mobile phone. It is a very light game to play and has tons of great features to play with.

I know most of you might don’t like playing games on phones but for those who like playing on phones. Township can be considered as one of the best games like Banished on Android or iOS smartphones. Moreover, the township offers a lot of things to do in this game.

It is a very well made game for players who just want to have the fun of city building game but doesn’t have too much time on their hand. It’s a great game in my opinion and you should definitely give it a try if you are on phones or have little to no time in hand.

It has many new features that you hardly gonna see on other games. The pc version is very interesting to play in my opinion but if you are a phone user then there are also great Simcity games on the smartphone too. If you simply like banished and want similar experience on the Smartphone then you must give Simcity a try. You won’t gonna regret it.

Age of Empires is another great city building gaming franchise that has offers many great games over the decades. But the Age Of Empires II: Definitive Edition is one of my favorites by far now. It is great in overall every aspect. The latest addition has improved many aspects of this game from soundtracks to the graphics.

Like Banished, Age Of Empires II: Definitive Edition has also a core connected to the city-building genre. The game offers many new features for you to follow or play with. There are also 4k Ultra HD graphics for players to choose from in this edition.

This edition brings many old memories to alive as it brings the famous Age OF Empires II in a very high Graphics for users to play at. It just looks gorgeous to play. If you like banished and always wish to play the game at very high graphics then Age Of Empires II: Definitive Edition is for you. Similar to play with very high graphics.

An early access game Factory Town is a great alternative for Banished. It’s a great game to play. A 3D city building game for the user to experience a 3D city-building management system. Not only that the game has really cool stuff to do in the game.

It is probably one of the best 3D city building out there if you ever wanted to experience one. You will start with just one building but after processing and managing resources well you gonna start to unlock a lot of new features in the game.

It becomes more and more interesting as you go through the game. It’s really surprising for an early access game to have so much depth and fun at play. There aren’t many games like these out there so make sure to check it out. I recommend this game to everyone who wanna play a great 3D city building game.

So there you have it guys these are the best games like banished in 2020 you can play. Most of these games are also can be considered as one of the best city-building games to play. There is not a particular best game overall from these games in my opinion.

Every game on this list is unique and has its own uniqueness. You can play these games as you like. I recommend playing those games which you might haven’t played yet. These games are so popular that many have played some of them. I like mostly City Skylines and on a smartphone, I like playing Township.

Don’t forget to check out the best games like Factorio to play. Let me know in the commend which one is your favorite. And which of these games you find your next favorite city-building games? I would love to know your opinions on these games. Keep playing.